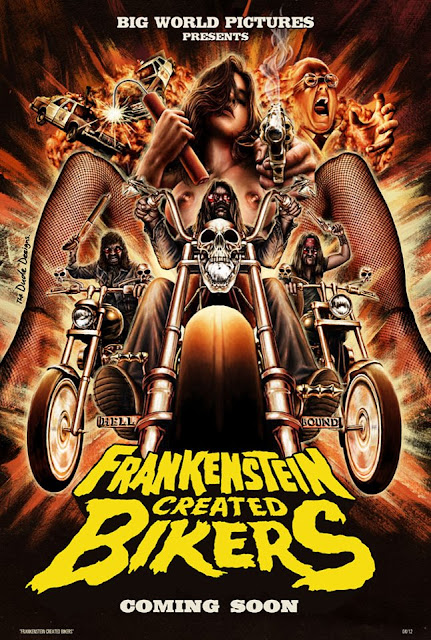 FCB is rumored to have a cameo from Tom "The Dude Designs" Hodge.  Tom designed the poster above and the Dear God No! poster.  He has designed so many amazing posters in recent years that I wouldn't know where to begin, check out his work HERE.  Also, my dearest Laurence Harvey (Human Centipede II), should be making an appearance in Frankenstein.

In-case you've been living under a rock and haven't seen the deranged exploitation/drive-in flick Dear God No!, it was released on DVD/Blu-ray/VHS on June 5th.  You need to check it out!  I first saw the film at Texas Frightmare Weekend convention in May, where I met Bickert and a lot of the cast.  They know how to throw a party!  Their screening was held Friday night at midnight, where they passed out PBR to everyone as the entered the room.  The entire experience was a blast and we have remained friends!

I was fortunate to be able to screen Dear God No! at my first ever Slaughter Movie House, June 4th and I hope to screen Frankenstein Created Bikers too.


DGN Synopsis:
Outlaw motorcycle gang The Impalers tri-state rape and murder spree ended in a bloody massacre with rival club Satan’s Own. The surviving members sought refuge in a secluded cabin deep in the North Georgia mountains. What first must of seemed like easy prey for a home invasion, became a living nightmare of depravity and violence. A young innocent girl being held captive may hold the key to the twisted secrets locked in the basement and the killing machine feasting on human flesh in the forest outside.