Let's start with Thursday, picked up Mr. John Pata (co-writer/director of Dead Weight) from the airport and go to DRC's pre-screening of The Apparition with Eric and Jeff (DownRight Creepy critics).  Holy god!  Was that awful?!  And I can usually find the light at the end of the tunnel.  We barely made it through.  And if you've read Eric's review, you already know how painful it was.  Before the film, a couple ghost hunter groups gave a presentation.  They opened of the floor for questions and someone asked what these hunters believed 'ghosts' were.  To our surprise, one of the women tells us she is a minister!  And proceeds to tell us that she believes these are angels cast out by Lucifer blah, blah, blah, because she doesn't want to believe in a God that would leave spirits here.  That turned the theater into a church and all the question from then on were about her religion, it got awkward fast.  All around, a great night!


The highlight of Crypticon, for me, was the Night of the Creeps reunion (Tom Atkins, Jason Lively, Jill Whitlow, Allan Kayser), screening and Q&A.  With about a third of the film left, in walks the cast and Allan yells, “Am I dead yet?!”  The crowd bursts out in laughter, “Just about!”  We could really see that they were fans themselves.  The casts' chemistry was unlike anything I've ever seen at a con, hanging out by them was constant entertainment.  Dead Weight's table was set up right by the Creeps.  Jason Lively (one of the craziest guys EVER) was obsessed with John and more importantly, his tattoo.  So Jason forcefully entered him into the tattoo contest.  John did not win and Jason yells, “It was FIXED!”, the second it ended.  There are far more ridiculous stories to tell that happened late night, but I would fear the legal repercussions. 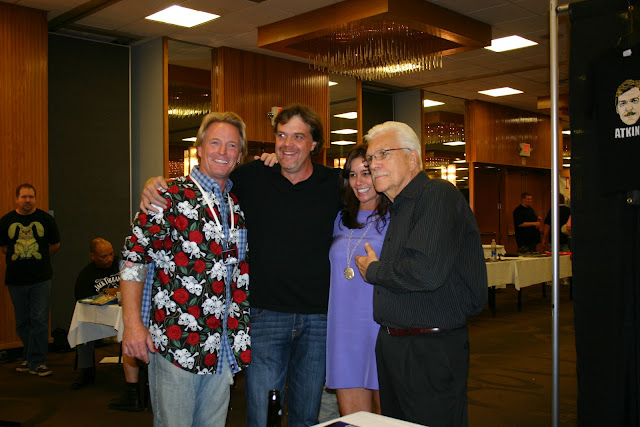 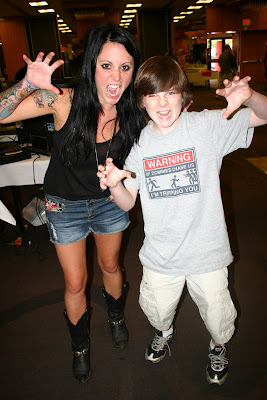 I had a fun photo shoot with Carl (Chadler Riggs).  He is just as adorable as can be.  His father was with him, and wearing an Atomic Cotton Goonies 'kids suck' shirt.  I can't wait for Walking Dead to start back up again. DRC is hosting a watch party at Alamo Drafthouse Kansas City!

Beyond all the photos, screenings and sleepless nights, I made some great friends. That always happens at horror conventions. The camaraderie, I believe, it what keeps us going back, over and over.  That's why I keep traveling to them!  I miss everyone.

Next weekend I will be at HorrorHound Weekend in Indianapolis.  Where a lot of friends are screening at Elvira's Horror Hunt: Dear God No!, Dead Weight and Nailbiter.  Plus, I hope to discover some new gems!