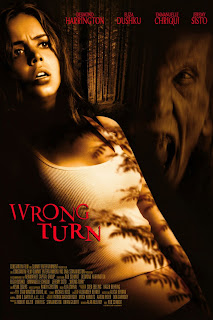 
Wrong Turn is from a time when original horror movies were still regularly released in mainstream theaters. Almost ten years ago, you might not remember.

This is my kind of movie, set in the middle of nowhere, amongst nature. Although it is set in Greenbrier Backcounty, West Virginia, it was actually shot in Canada. It got me from the opening kill scene. The laughs coming from the trees, when the rock-climbing chick is trying to get away, are terrifying! It really starts off with a punch and the kills throughout are top-notch.

Wrong Turn is a story similar to that of The Texas Chain Saw Massacre or The Hills Have Eyes and that doesn't bother me because it is still manages to be all it's own. In fact, that combination is like my f***ing dream! This trio of depraved cannibals, Three Fingers (Julian Richings), Saw-Tooth (Gary Robbins), and One-Eye (Ted Clark), set booby-traps to catch their next meal deep in the Appalachian Mountains. Who isn't scared of being lost in the woods?

Low and behold I turn on the commentary on my DVD and the director says, “The thing about Wrong Turn, it's a 70's style horror film like The Hills Have Eyes and The Texas Chain Saw Massacre, the idea is to make something that... gives the audience jolts, every few minutes a jolt of brutal horror or violence.. with tension between the jolts.” He did something right, because that is exactly how I perceived it. 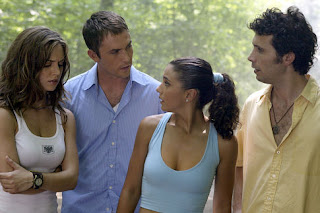 The cast brings back so many memories, that I feel like they are old friends. We have one of my big teen crushes, Jeremy Sisto (Clueless, May, Six Feet Under). Our hero is played by Desmond Harrington (Chris), who I didn't know at the time but has since then gone on to be in Showtime's Dexter. The hot chicks are played by Eliza Dushka (Bring It On) and Emmanuelle Chriqui (100 Girls, Entourage). Dushka (Jessie) plays her typical role, the bad ass. Chriqui (Carly) gets the best kill of the entire film when she gets an ax to the face!

The only thing this film is lacking is nudity. Every good gore flick normally includes the crucial 'boob' element. The horror genre is very sexist and I am happy to find a great film that didn't rely on female nudity! I have to accept sexism when watching older films, especially the 80's slashers.

If horror cliches bother you, Wrong Turn will hurt your brain. Chris (Harrington) stops at a hole-in-the-wall gas station and gets direction off of a creepy old map, wrecks his car in an area with no cell phone service, and the group separates on foot looking for help. They walk right into the crazies house, start snooping around and aren't scared off by the collection of odd trinkets cluttering the entire place. Nor are they scared off by jars full of random body parts. What? No, not until Carly screams 'let's get out of here!'  By then, it's too late. And still, I tell you, I love this movie. 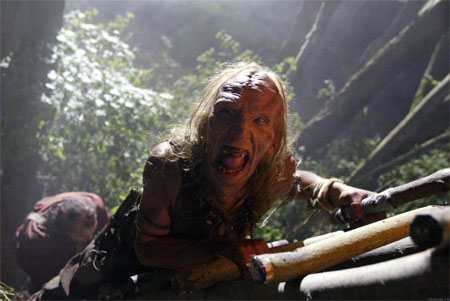