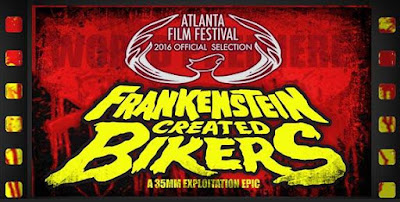 FRANKENSTEIN CREATED BIKERS is James Bickert's 35MM Epic sequel to DEAR GOD NO!  Just a year ago we were raising funds on Kickstarter.  And in one week and one day (Saturday, April 2 at 9:30 PM) it's making its world premiere at the 40th Annual Atlanta Film Festival!  All of the stars will be there: Tristan Risk, Jett Bryant, Ellie Church, Laurence R. Harvey, Madeline Brumby, Gia Nova and more!  Me too!  I am so excited.

Last year when I first heard about the Kickstarter campaign I contacted James and asked if I could help in someway.   I wanted to work on the film.  He offered me the position of assistant director and I jumped at the opportunity (with no experience).

I met James (Jimmy to most) and his gang at Texas Frightmare Weekend 2012.  My flight got in early on a Friday and it was hot as hell so I went to chill at the pool.  I see a group of long-haired, tattooed, already appear to be drunk at noon looking people and think, I wanna hang with then.  So I did and they tell me their film DEAR GOD NO! is showing at midnight.  I didn't think these crazy drunks would make it to midnight, they showed me!!  Such a wild and fun weekend.  That is also where I met Laurence R. Harvey.  When I got home I was so amped up from meeting so many inspiring people.  I wanted to figure out a way to be part of that world.  Making a film didn't dawn on me at first.  Coincidentally some friends of mine who owned a bar here in Kansas City, Missouri were interested in hosting a regular movie night.  That's where Slaughter Movie House began, a monthly independent horror screening series I still run today.  DEAR GOD NO! was the first film we screened.  It was the inspiration for Slaughter.  And Slaughter is what made me believe I too could make a film.  For this reason I feel extremely close to James and this gang who made Dear God NO!


We shot FRANKENSTEIN CREATED BIKERS' principle photography last May.  Our days were full of machine guns, strippers, stunts, blood, explosions- it was a one of kind experience.  Each weekend we would head out to a different remote location- which was my favorite.  I love the morning, driving, the outdoors and exploring.  There were hard times of course, but worth every second.  There are so many stories to tell, but most would spoil the film.  Working on a shoot, especially this film, is like a new adventure everyday.  I am addicted to that feeling.


I felt like this was a once in a lifetime opportunity- to work on a exploitation film shot on 35MM.  It was like my chance to hop in a time machine.  Jonathan Hilton was the director of photography, he also shot DEAR GOD NO.  I really freaking love this dude.  He taught me a lot.  Somedays I did the slate and I'm not sure anyone else liked me doing it (ha!) but I loved to learn about it.  This is where I learned that with actual film, we need to record the amount of feet used on each take so that we are prepared to change rolls.  You don't want to run out in the middle of a take.  Duh, right?  But I had never experienced it before.  I did not go to film school.  I am learning as I do and I geek out.  We are so spoiled by digital cameras.  It's truly a different thing.  I see the romance in doing it this way.  It takes so much more discipline.  I've told Jonathan I want to work together someday.

The red band trailer for FRANKENSTEIN CREATED BIKERS was released last month.  Check it out HERE.

It is an honor to be part of this team.  I made so many great friends on this project.  James and his wife + producer Lisa treated me like family during my time in Georgia last year.  I can not wait to see the film with everyone next week in Atlanta.  If you can join us a the premiere, grab your tickets now!

Check out some of my behind-the-scenes photos: