ABCs OF DEATH 2 had its world premiere last Thursday at Fantastic Fest in Austin, Texas.  And they did something I've never heard of before- Fantastic broadcasted their opening night to multiple Alamo Drafthouse cinemas across the country, including the one here in Kansas City.  I was so excited to watch the film at the same time as the premiere.  Plus, they broadcasted the Q&A afterwards with all the filmmakers who were down in Texas.

I had the honor of working on the film!  I was asked by Jen & Sylvia Soska aka the Twisted Twins to second unit direct a scene for their segment.  I was head over heels excited to have an opportunity like this.  This was September 2013, right after we shot CALL GIRL.  Laurence R. Harvey was still in town and the Twins wanted him in the film.  Talk about being in the right place at the right time!  Brian Hicks shot it and Adam Roberts did damn near everything else.  We filmed it in my friend, Lindsay Solomon's, awesome loft.  I don't want to spoil it, but we had a blast.  Laughed our asses off.

So, last Thursday a group of us went to see the movie.  I was impatiently waiting throughout the film for our segment to play and the scene we shot wasn't in the Soskas segment.  I started to freak out.  We watched the credits to see if we'd still be in there.  And much to my SURPRISE the scene was at the very end of the credits.  The secret scene!  Just like all the superhero movies do!  SO COOL! 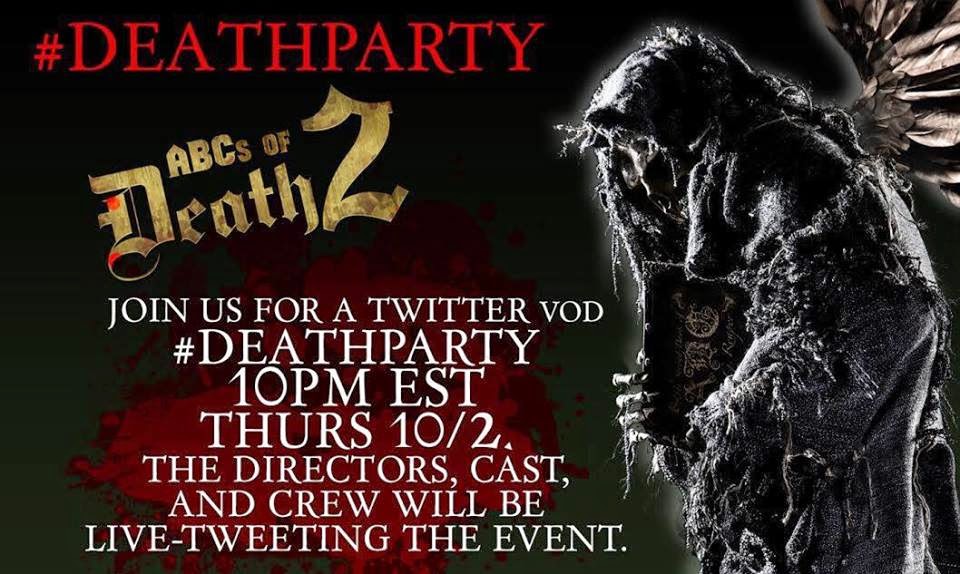 Today the movie released on VOD & iTunes.  If you're free you should join the watch party and live tweet along with the cast and crew tonight.  The plan: push play at 9 PM (CST) and include  "#DeathParty" in your tweets.   I'll be there.