Wow.  Where has the time gone?  I'm so sorry!  It's almost OCTOBER!  I HAVE SO MUCH TO SAY!  I've acted in a film, went on a lot of trips, worked on a photo shoot for Joshua Hoffine, and am now directing my very own film!  And between all of that, I've continued with Slaughter Movie House.  We had our first anniversary in June.  To say I'm on a 'high', isn't cutting it!


I am a DIRECTOR!

We just (last week) wrapped shooting my first short film, CALL GIRL.  The script was written by a great friend of mine, Eric Havens.  I took on the project in May and worked all summer building a crew.  Last minute I had the chance to use an all-star horror cast: Laurence R. Harvey (The Human Centipede 2 & 3) and Tristan Risk (American Mary).  So I threw together a Kickstarter campaign in what had to be record time, launched it and almost doubled our goal $$$!  Most of that money was to bring in my international cast, Laurence is from England and Tristan is from Vancouver.  I had a blast showing them around Kansas City.

The film will be released early 2014 and I am so looking forward to all the travel ahead of me (film festivals, horror conventions and more)!  Follow CALL GIRL on Facebook and Twitter for all the fun updates and photos.

I am premiering the teaser this coming weekend at the Oshkosh Horror Film Festival!

May/June 2013.
Laurence invited me out to LA while he was there filming The Human Centipede 3 and it also happened to coincide with the American Mary US premier.  How could I not have jumped on the opportunity to meet THE TWISTED TWINS, Jen and Sylvia Soska (directors)?!?  That is also how I met with Tristan, who played Beatress in American Mary.

While out there I connected with a lot of the filmmakers whose film's I've shown here at Slaughter Movie House, but hadn't yet met in real life.  I spent a lot of time with Vito Trabucco (Bloody Bloody Bible Camp) and we got along like we had known each other forever!  I also met Eric England (Madison County) for coffee and invited him and his actor/producer, Ace Marerro, out to the American Mary after party.  It was surreal to be at a party with filmmakers I admire and I was the connection between them all.


I did a ton of sight-seeing, explored the Charles Manson ranch and hiked to the Hollywood sign.  A blog with my travel explorations is coming soon!

March 2013.
I drove myself all the flippin' way to Cincinnati (9.5 hours), but I stayed the night in the exciting town of Bloomington, Indiana on my way.  And yes, this was on purpose.  Last summer I attempted to go to and climb the Hickory Ridge Fire Tower in the Hoosier National Forest but the weather and time didn't allow it.  This seemed like the perfect way to break up my drive.  Again, I will post a blog shortly with photos of my explorations! I truly went to HHW to see my out-of-town horror friends (John, Adam, Alyssa, Kyle and Scott) and hoped to catch some awesome movies.  The Maniac remake had a limited screening and we made it in!  The environment you see a film in can make all the difference.  I really, REALLY enjoyed the film.  The score is f***ing fanstastic, very retro/synth-y, a trend I'm noticing in film!  The Walking Dead took over the entire convention and kind of threw the vibe off.  It was much bigger, in multiple buildings, so it lost a bit of the close community feeling.

This coming weekend I am headed up to see the crew (pictured) at the Oshkosh Horror Film Festival!  John and I will be on WAPL 105.7 Thursday afternoon discussing his fest, independent horror, and our upcoming films.

March 2013.
Kansas City's horror scene is very tight and we all work together on a multitude of projects.  You probably have seen Hoffine's work.  It work is very well known and he is from KC.  Please, go now, and look at his work.  You will NOT be disappointed.  This guy is seriously talented and unique.  He creates his photos with almost all practical FX.  He preps for his photo shoot like a film production, he tries to do very little post-FX.

For this project, he wanted to create a scene with zombies attacking the last family on earth.  He had a very successful Kickstarter campaign and brought in an incredibly talented practical FX artist, Anthony Kosar.  You may recognize his name as he was the winner of Face/Off season 4!  I went in to help with hair and ended up basically assisting Anthony.  It was f***ing cool. 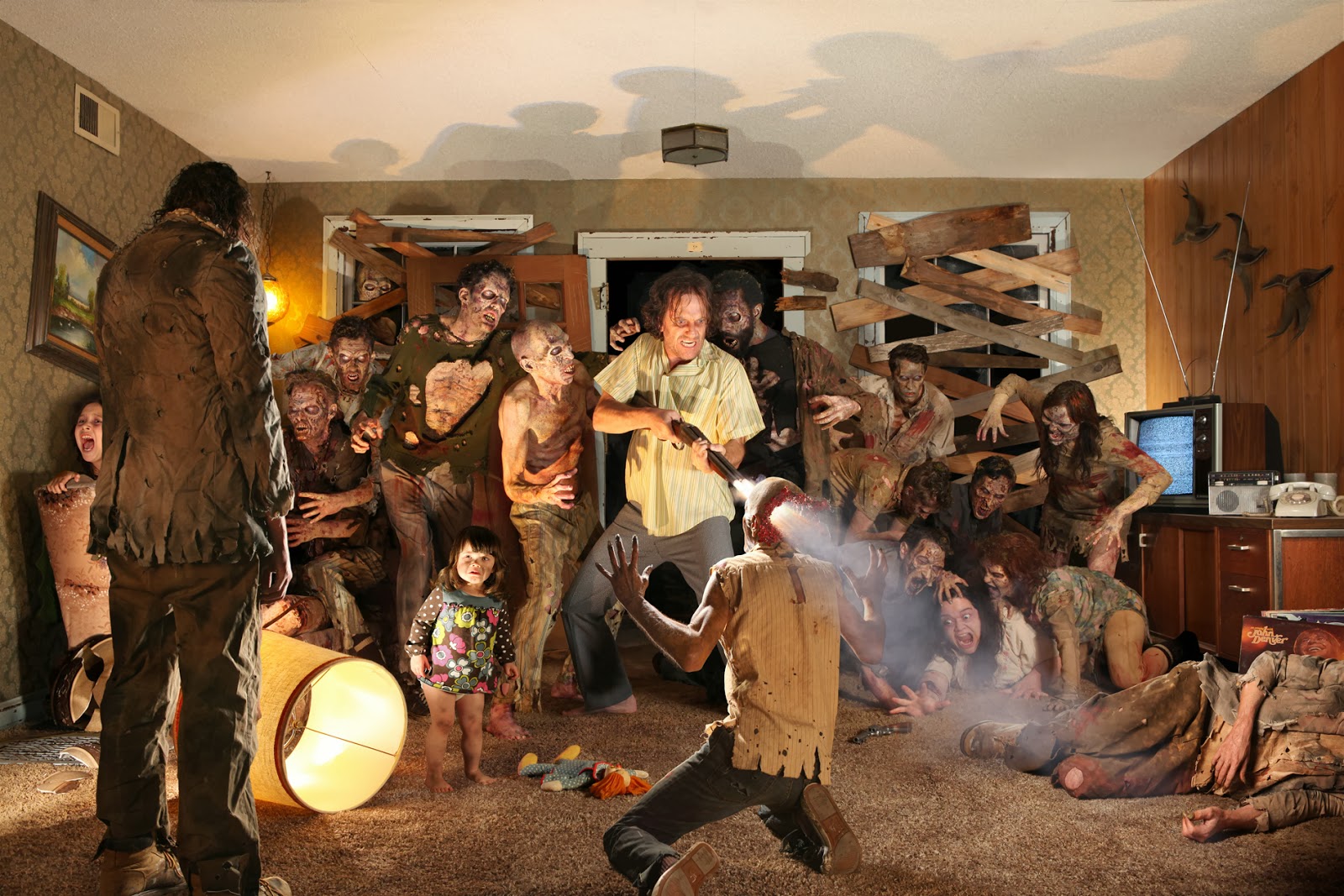 Michael Baldwin (Phantasm) starred in the photo!  My great friend Erica Kauffman is playing the wife, on the ground.  For more info, check out Joshua's blog.

February 2013.
This past winter I had the honor of acting in Todd Sheet's new film, House of Forbidden Secrets.  Todd started back in the 80s and has made over 30 films.  HOFS stars my favorite red-headed southern gentlemen, Lew Temple (The Devil's Rejects, Walking Dead).  And if you're a horror nerd, you'll appreciate cameos from Allan Kayser (Night of the Creeps) and George Hardy (Troll 2)!

I had many friends on the crew and I told them, 'When you guys need an extra, CALL ME!"  They did.  HOFS is about a man and his first night working security in the haunted old Shadowview Manor. And I got to play one of the ghosts!  More than that, I got to kill!  My official title is a 'killer siren', a seductive ghost.  I got to work WITH Lew Temple and Allan Kayser and WOW.  What an amazing first film experience.

I went in for 3 nights of filming, 3 scenes and a lot of blood.  There are a couple trailers out now and I made it in there!

We screen Saturday, October 12th at Horror on the Boulevard!  Come hang out with the cast and crew and see the film at the DRIVE IN!!!  How fun??


I PROMISE I will keep up better with blogging in the future!  October is destined to be a great month.  Slaughter Movie House is screening Don't Go to the Reunion (October 7th) and hosting The Blair Witch Project at Screenland Armour (October 25th)!  Not to mention, Screenland is showing bad-ass horror classics all month long.  Check out the schedule HERE.  That is where you can find me. 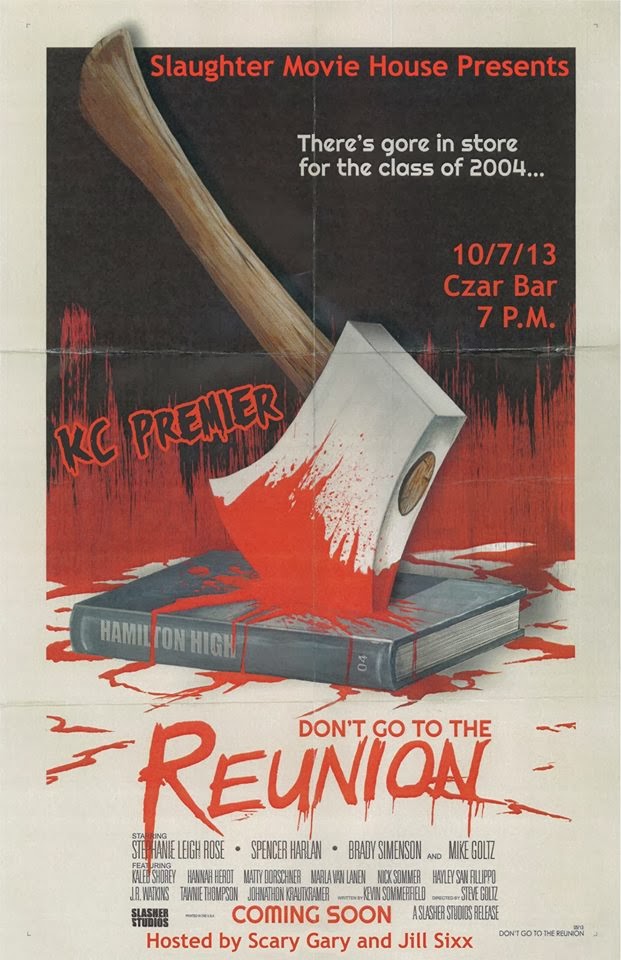