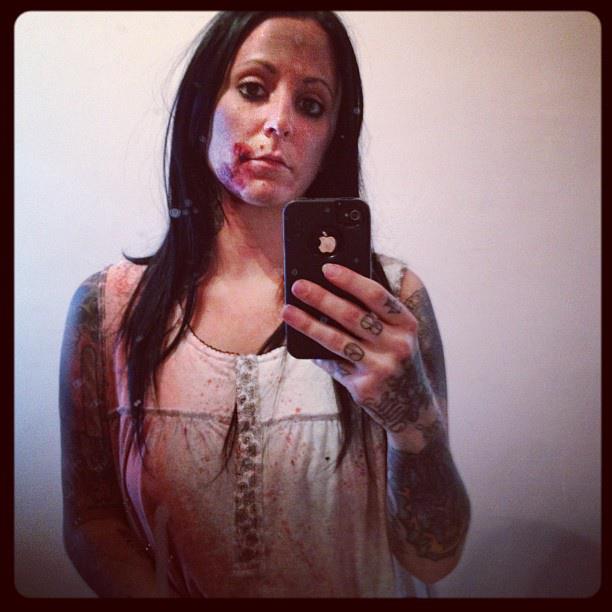 It was Halloween morning.  I was surfing Facebook.  I get a notification from Lindsay on Johnny Starke's post, "ALRIGHT! Looking for people to be dead bodies TOMORROW in a rap video! Shooting in the crossroads. You will be covered in blood. GET AT ME!!!"  How could I ignore this?  Two of my favorite things happening at once!?  I immediately contact Johnny and he told me when and where to be.  And at this point, I had no idea who the artist the music was for.

I wake up November 1st pretty tired, because of the Slaughter Movie House event on Halloween, I screened Night of the Living Dead.  I head down to this unmarked warehouse, where they are shooting.  When I walk inside I am blown away.  I have walked into a room that looks like a torture scene from Hostel.  But I still have no clue who this video is for.  I text Lindsay and we put it together from other Facebook posts, that I am about to be in a Brotha Lynch Hung video.  That crazy serial killer rapper, everything makes so much sense now.  He is on Tech N9ne's record label, Strange Music, and is from Sacramento, CA.

Johnny makes me look beautifully dead.  The first scene we shoot, I am on the top of a pile of dead bodies.  I'm the lucky body he chooses to drag out of the room.  This was actually scary, waiting with my eyes closed to be violently grabbed.  It's an interesting thing, to concentrate on not reacting.  I feel worse for the people who were underneath me, who didn't move from that position for at least 2 hours.  In the second scene the killer drags me into that Hostel torture room and throws me into a barrel.  We got that in only 2 takes.

I had so much fun and was dying to see the finished product.  And finally it was released last week!  Fear.net even wrote an article on it.  Check me out at 1:00.  Brotha Lynch's new album featuring this song released today, Mannibalector.