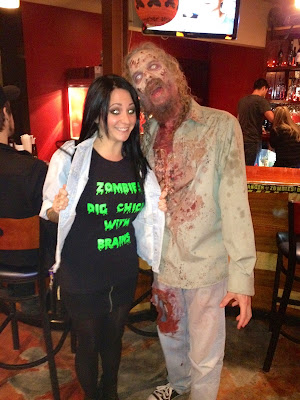 How do I feel about The Walking Dead as a whole? It's a soap opera with zombies. What I appreciate most about the show are the special f/x. The fact that they will and can show this level of gore on cable is mind blowing and incredible. I love that.

My kill count is only semi-accurate. That is the number we see die, but there are more in the background. My favorite moment is when Rick takes the mask off one of the SWAT zombies and his skin comes off with it. Then the zombie head is just jiggling until Rick chops it in half. I thought that was hilarious and seemed like a nod to some old school zombies films. Seriously though, 59 kills in 45 minutes (without commercials), that is awesome.

I am not particularly a huge fan of anyone left in the cast, except Daryl. I hate Lori, I hope that baby eats her. Carl seems to be maturing quickly. He is being treated like an adult and is killing zombies left and right. I find it awkward that he's flirting with the girl (can't remember her name for the life of me) who looks at least 5 years older then him. We finally met Michonne and her arm-less, jaw-less zombie mules. Genius, she is.

The watch party made the experience all the more fun. Screenland is a local chain of theaters here in Kansas City and they do a great job keeping up on horror. Screenland Armour will be showing The Walking Dead weekly. This Wednesday they are also showing American Horror Story on the big screen and I will be there!
Posted by Jill-Sixx Gevargizian at 4:17 PM